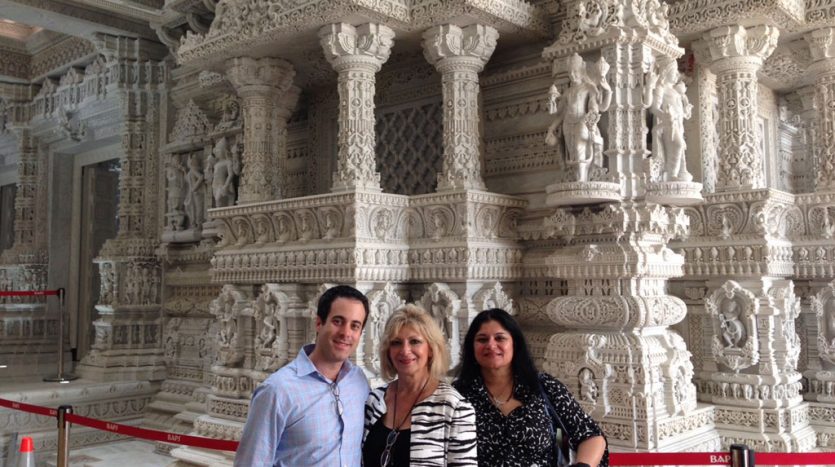 ROBBINSVILLE, NJ – The team at Traditions at Chesterfield, a premier new home community featuring both single family and townhome options in Chesterfield, NJ, recently had the chance to learn more about Hindu heritage and culture by touring the BAPS Shri Swaminarayan Mandir on Main Street in Robbinsville.

Mandirs, whose name comes from the Sanskrit words “man,” which means mind and “dir,” which means steady, are places where the mind comes to be still and experience peace. The BAPS Shri Swaminarayan Mandir manifests this core serenity at an accessible location in Mercer County.

“Upon entering the mandir, you’re encouraged to leave all of your worldly stress behind and enter with peace of mind,” said Camille Montalvo, Sales Manager at Traditions at Chesterfield. In addition to serving as a quiet place to spend time in reverence, the mandir also offers a space to understand Indian art, acts as a platform to give back to the community through charitable efforts such as health fairs, food drives, and blood drives, and hosts celebrations to honor Hindu deities and gurus as well as conferences including the BAPS Women’s Conference.

Construction of the mandir, which stands 42 feet tall, 133 feet long, 87 feet wide, and is made up of 68,000 cubic feet of Italian Carrara marble, officially began in 2010. After being quarried, the marble was sent to India where artists hand carved the stones before shipping the 13,499 individually carved stone pieces to Robbinsville.

“The hand carving of the marble is magnificent,” said Montalvo. “The atmosphere of the mandir is very serene.” Officially opened in August 2014, the mandir was constructed by volunteers and craftsmen and took a total of 4.7 million man-hours to complete.

The Traditions at Chesterfield team were given a tour of the temple by Siddharth Dubal, a volunteer for BAPS. Dubal imparted his knowledge about the many deities that appear in shrines throughout the mandir as well as explained the rich cultural and religious significance that the temple’s intricate adornments bear.

“Many people ask why there are so many peacocks depicted in the mandir,” Dubal said. “The peacock is the national bird of India because it symbolizes purity and humility. When the peacock unfolds its feathers and shows its beauty, it cannot do so without bowing down.”

Elephants are also a common motif in the art and architecture at BAPS Shri Swaminarayan Mandir: there are 91 of them holding various flowers and musical instruments within the temple.

“Throughout history, the elephant has played a huge role in mandirs. The elephant is a massive animal with great strength. But because of its humility, it does not abuse its power,’ Dubal said. “It’s a daily reminder to us of the importance of staying humble.”

Tours are offered for groups of 9 or more and can be reserved in advance by visiting BAPS.org. Smaller groups can inquire about tours on the day of their visit at the reception desk.

Located in Chesterfield, NJ, which has been voted the #1 “Best Place to Live” in Burlington County by Philadelphia Magazine, Traditions at Chesterfield is situated in close proximity to the New Jersey Turnpike, Routes 195 and 295, the River LINE Light Rail, the Hamilton train station and Amtrak train station. Residents will also benefit from easy commuting to both New York and Philadelphia, as well as easy access to Trenton and the Princeton/Route One corridor.